ComScore, the marketing research company has released a report for US mobile market share. According to the latest report, Android has shown amazing performance and continues to grow. Android is growing faster than any other mobile operating system due to its incredible products as well as adoptable by many mobile device manufacturers. 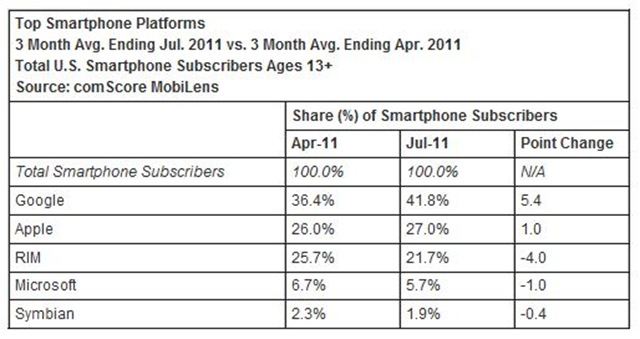 Android was at 31.6% last month but this month it has increased and reached up to 41.8% among all US Smartphone’s. It means that out of 82.2 million Smartphone users in US, 34.3 million are having Android as their companion.

Iphone is still in competition with 27% of the US market share having an increase of 1% from April 2011. It’s predicted that the growth is just because of the rumors that iPhone 5 is soon to be released worldwide.

Now finally Symbian is down from 2.4% to 1.9% of the market share. Android is ruling the entire US market share with incredible OS and amazing features. Just wait and watch how it moves forward in the near future.